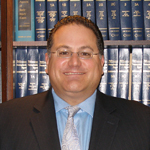 Louis Dobi began his legal career representing consumers against large corporations in state and federal courts, where he successfully litigated hundreds of cases at trial and in arbitration. He went on to represent trucking companies in personal injury matters. With the law firm of Marshall E. Kresman and Associates, Mr. Dobi has returned to representing injured individuals and now represents them in a vast array of personal injury cases.

Contact us to reach our Bensalem personal injury attorney today to get a free case evaluation.

Mr. Dobi graduated from Bard College with a Bachelors of Arts in Philosophy in 1998. He received his Juris Doctor from the Temple University School of Law in 2001. He is admitted to practice in the states of Pennsylvania and Maryland, as well as the U.S. District Court for the Eastern and Middle Districts of Pennsylvania and the District of New Jersey.

Mr. Dobi is a member of the American Bar Association. In 2005 and 2006 Law & Politics Magazine recognized him as a Pennsylvania Rising Star.